Cryptocurrencies made a strong move in 2017 and many traditional companies are taking this technology very seriously. Investors have earned enormous returns thathave  attracted even more investors. Cryptocurrency investing is becoming very popular due to Bitcoin’s frequently publicized surges in price. The question is, what cryptocurrency should you invest in by 2018 to make a profit? Will there be another coin that will see a 700% rise? Are you looking for the best cryptocurrency picks for 2018 because you don’t want to miss the boat?

Good! You are in the right place!

We have picked 7 cryptocurrencies with a strong potential to see returns of hundreds of percentage points in 2018. Even though some of them might already seem at their respective all-time high prices, we believe we are still in the early stages. 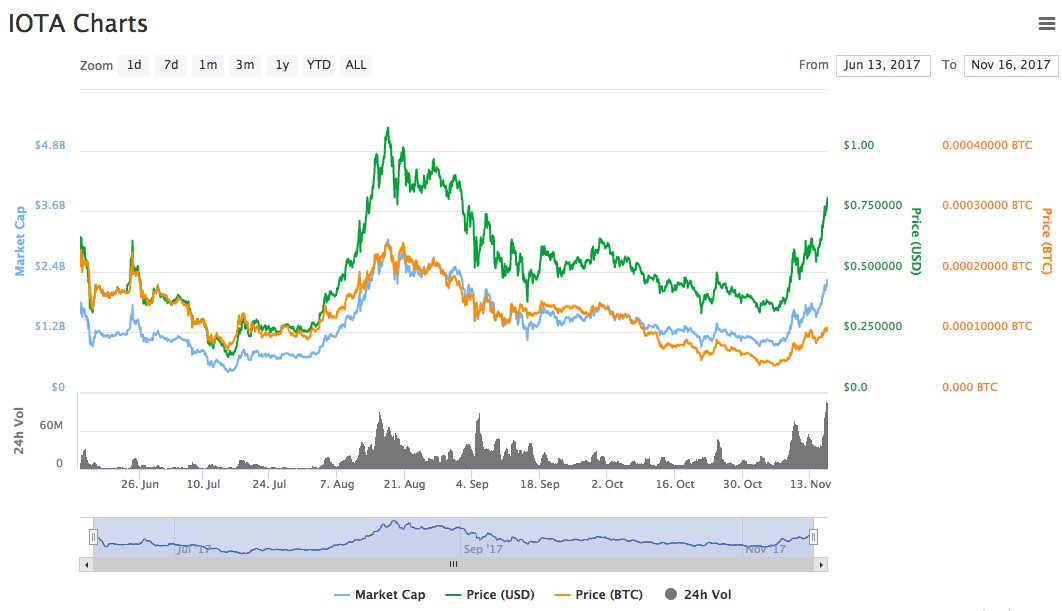 IOTA is a cryptocurrency that focuses on machine-to-machine transactions and its main purpose is to serve the machine economy. IOTA goes beyond the blockchain and uses a technology informally called Tangle, which allows for huge scalability, zero transaction costs and even offline transactions. IOTA is undoubtedly one of the most innovative decentralized payment technologies. The core team seems to be proactive and well organized. The valuation is still very low. The rise of IOTA is connected to the impending rise of the Internet of Things. We are still at the beginning of the IoT economy. The year when the price of IOTA will surge might be 2018 or 2020. Some investors have already taken the advantage to buy IOTA at low prices of a couple of dollars.

You can buy IOTA on Binance exchange.

ConcertVR combines the fascination of virtual reality with the innovative idea of a decentralized crypto world and contributes to a growing acceptance of cryptocurrencies worldwide. Change the music forever! Litecoin was introduced in 2011 and since then it has attracted many talented programmers and developers. It was released as an open source client by Charlie Lee, a former Google employee. Charlie Lee worked at Google (2007 – 2013) and Coinbase (2013 – 2017). He quit his job in Coinbase in June 2017 and dedicated himself to Litecoin development. His tweet about leaving Coinbase became famous:

“Today is my last day at @coinbase! I will miss working with you all. I am going to shift my focus to Litecoin now. To the Moon!”

Litecoin is one of the most popular altcoins in the cryptocurrency market. It provides faster transaction confirmations (2,5 minutes on average) than Bitcoin and has significantly lower payment costs. Litecoin has implemented the Segwit scaling solution and the Lightning Network. It is therefore no surprise Litecoin has such a large community surrounding it.

When Bitcoin has slow transactions and high fees, Litecoin is becomes the cryptocurrency for everyday use. Lots of donations are done with Litecoin, as well as micro-transations and nowadays even middle-sized transactions. Litecoin is becoming more and more popular because the development team does their work well and simply keeps Litcoin working. 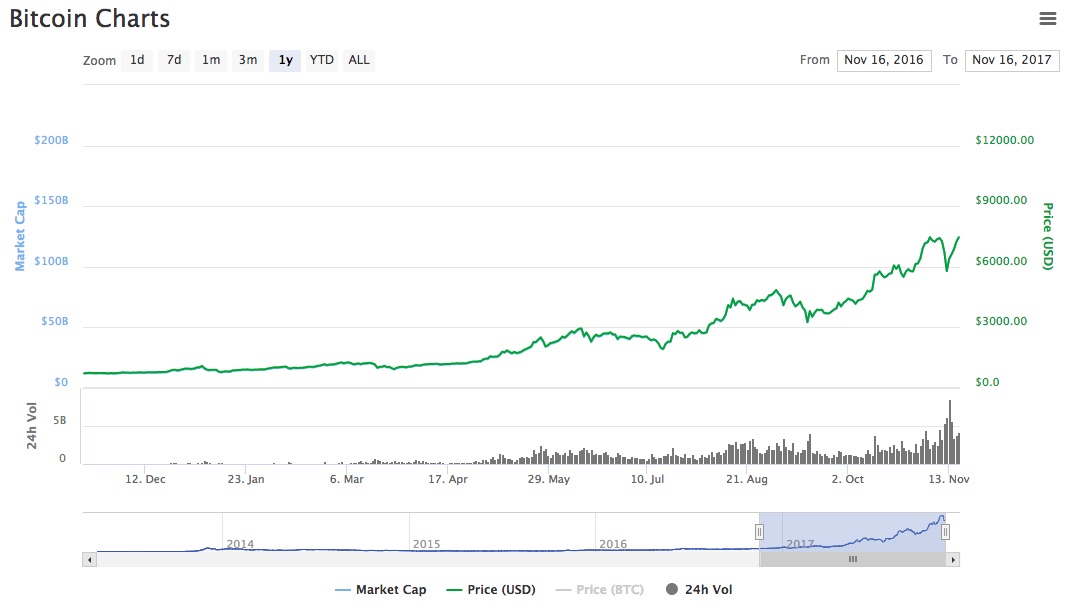 Bitcoin was created in 2009 and it is the first cryptocurrency based on blockchain tech that has gained such widespread adoption. Even though there are more than a thousand digital currencies nowadays, Bitcoin has stood strong at the top since the very beginning.

We have seen Bitcoin all-time highs in 2017 and there are many signals that we will see bitcoins traded at even higher prices in 2018. Bitcoin has since become even more powerful after a few forks. Regulations coming from China, South Korea and the USA haven’t stopped cryptocurrencies yet. The community of Bitcoin is the largest community in the cryptocurrency space. Even though Bitcoin is not the most innovative cryptocurrency, it has the most business value as of yet. Many traditional financial institutes want to include Bitcoin into their risky portfolios.

Yes, there might be dump by the end of 2017 but many influential people in the blockchain space believe in a strong year 2018 for bitcoin. 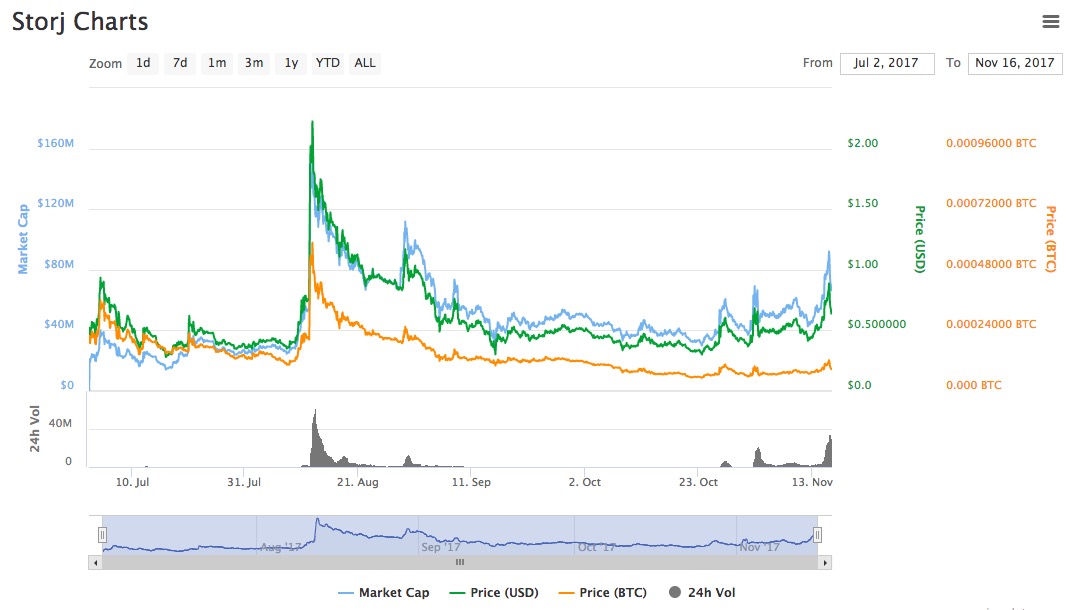 Storj is a decentralized cloud data storage solution. It has the potential to become the largest, cheapest and most secure data storage available. End users can store their files at competitive prices or they can rent their extra space on hard drives and get paid. Storj is an open source project based on the blockchain. It is a P2P network that is secure from downtime, censorship and hacks.

Storj is not only a speculative cryptocurrency, it provides real value. Since the team have launched their product it has actually been used by many end users. By the end of 2020 big data will rule the world and many of us will need storage that is big enough while maintaining speed and security. Storj is the solution. With the rise of cryptocurrency in 2017, the next year might bring forward those blockchain projects that are not connected with fintech. Especially when one has already invested into several cryptocurrencies and is looking or diversification, Storj is a favourite among many crypto investors. 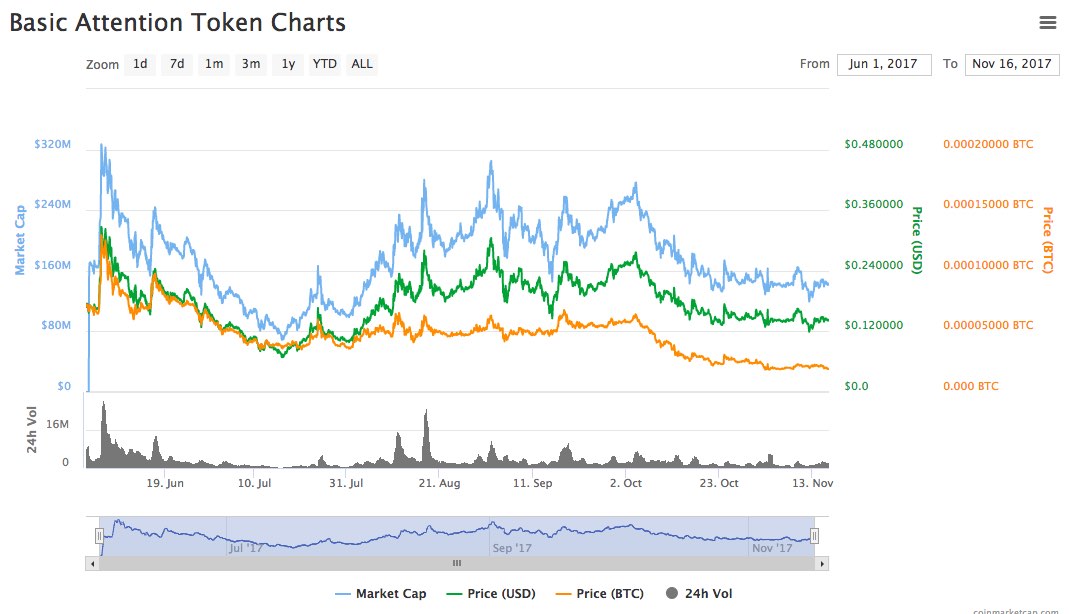 The Basic Attention Token introduces blockchain-based advertising. The BAT token aims to improve efficiency of digital advertising. It will be exchanged between publishers, advertisers, and users without any middle-man (like for example Facebook or Google). The price of BAT is very low, it already had some peaks, but never stayed at its all-time high for a long time. BAT has a strong team with leader Brendan Eich, creator of JavaScript and co-founder of Mozilla and Firefox.

Investing into BAT is more long-run than a sprint strategy. What investors like about BAT is the combination of digital marketing area, strong leadership and a clear vision to change the status quo of advertising on the Internet. 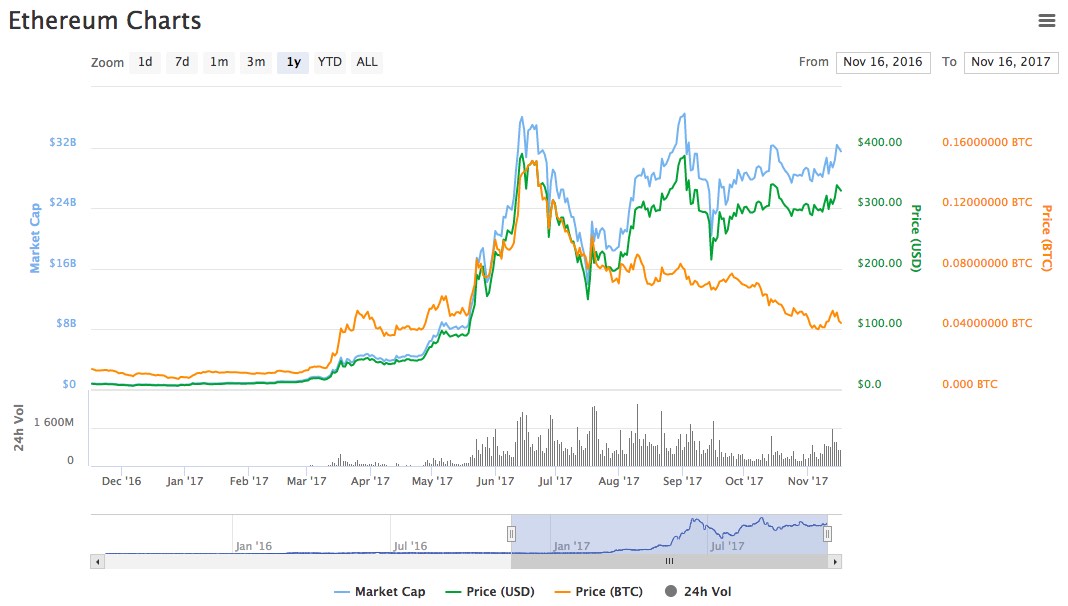 Ethereum is a decentralized platform that runs smart contracts. It was crowdfunded in August 2014 and its biggest boom occured in 2017 when many new cryptocurrencies used the Ethereum platform to fuel their ICO (Initial Coin Offering) crowdfunding. Ethereum is the number two cryptocurrency by market capitalization and it is considered a rising star. Some might not like the founder and central leader Vitalik Buterin who leads the project (there is some speculation about fake decentralization). Anyway, Ethereum is a layered protocol that creates an ecosystem for many cryptocurrencies and blockchain startups. That won’t change in 2018 and for that reason ETH stays on the portfolio of many crypto investors.

Which cryptocurrency will rise in 2018

To be honest, nobody knows for sure which cryptocurrency will do well. It is always a high risk to invest in cryptocurrencies. The market is extremely volatile and young. The cryptocurrencies that performed in 2017 with the highest returns needn’t have the same results in 2018.

Invest no more than you can lose. This article is not to be taken as investment advice or a recommendation. It is just a speculative opinion. Be aware that cryptocurrency investing has shifted from a hacker novelty to mainstream practice. Unfortunately there inevitably still be some people losing their money, so never forget to do your own independent research before you put money into crypto.

MobileCoin Review: Should You Buy MOB as a Crypto Investment?