The cryptocurrency market experienced another bearish run. Media news sites have been publishing a lot of negative stories. There were just a few of them concerning the fundamentals of cryptocurrency. On the other hand, the crypto market is slowly healing. Noone knows where is the real bottom. But remember, as an experienced trader, you shouldn’t try to time the market. 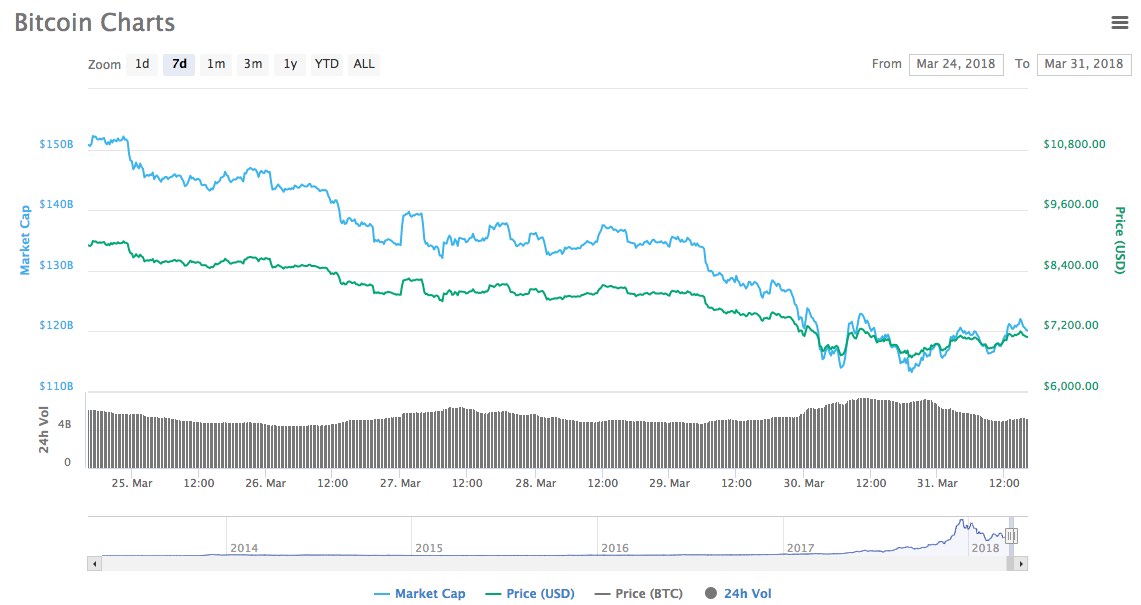 Have a look what you might missed from the last week of March 2018.

Starting Tuesday 26 March, the microblogging platform will be banning all advertisements related to ICOs and token sales globally.

Reports have emerged suggesting that Western Union is trialing the Ripple XRP blockchain as a means of transferring assets between branches. This would be huge news for Ripple XRP, dwarfing all of the cryptocurrency partnerships that we have heard about to date.

Apparently, Bitcoin is dead. That is what the world’s media have been telling us for as long as the crypto has been alive. In fact, the number of “Bitcoin is dead” articles is over 250, and counting. The doomsayers have been wrong time and again.

The founder of cryptocurrency payments start-up Abra feels that there’s a lot of exaggeration involved in the reports of bitcoin’s imminent death. Bill Barhydt indeed predicts better days ahead for the widely popular digital currency, and it’s not just blind optimism that backs him.

Bitcoin big whale Tom Lee urges bitcoiners to hodl on despite recent bloodbath. The Fundstrat team has predicted a bullish 2018 for the crypto markets led by bitcoin and ethereum.

Hotels in Kaliningrad, Russia, will let football fans pay for their accommodations with bitcoin when they visit the country for this year’s FIFA World Cup, which will be from June 14 to July 15.

Binance has well over 10 million active users and a daily trading volume worth of USD$1.7 billion, putting it in elite status as one of the largest cryptocurrency exchanges in the world. Coinbase is located in the United States, has over 20 million users, is available in 32 different countries, with over US$150 billion in total trades, and is one of the largest fiat-to-crypto exchanges in the world. GDAX is the advanced trading exchange for Coinbase and average daily volume is USD$ 374 million, which is significantly lower than the volume on Binance.

Survey: 40 percent of young South Korean adults are willing to invest in cryptocurrencies

The Bank of Korea (BoK) conducted a poll among 2,511 participants and found that 21 percent were aware of digital currencies such as bitcoin and ethereum. However, that figure rose to 29.4 percent for the 20-somethings age group and 40.3 percent for those within the 30-something age bracket.

Time to buy the Ripple (XRP) and Stellar (XLM) dips

But with such dips, comes opportunity of getting your hands dirty once again in the markets.

Big banks take another look at Bitcoin and Ripple

As Bitcoin and the cryptocurrency market get pressured by a bearish sentiment based on the technical pattern known as “death cross”, investors are also aware of the mixed signals coming from big banks regarding the asset class – with great focus on Bitcoin and Ripple.

Ripple XRP partnering up with Hyperledger

The San-Francisco based startup Ripple [XRP] has just announced a partnership with Hyperledger – an open source initiative, marking an important step on unfolding the infrastructure for their long-term view of the Internet of Value.

Crypto-related activities are now considered legal in Belarus. The presidential decree “On the Development of the Digital Economy” came into force on March 28. The country aims to become a global IT hub luring entrepreneurs from around the world with a business-friendly environment.

Mt. Gox suspected for another BTC sell off

It has been reported that an unknown account that is holding a massive amount of BTC has transferred 7,000 of them to an exchange and is approaching people to make the sell-off.

One of the most successful and prominent Australian blockchain startups, Power Ledger, has unveiled the first commercial deployment of its energy trading platform. With this deployment, the Australian startup will partner with Greenwood Solutions, a company that works with renewable energy projects.

The Ford Motor Company filed a patent on Tuesday describing a token-based system that allows vehicles to improve traffic flow.

The German National Tourism Board (GNBT) has announced that it starts accepting cryptocurrencies for the services they offer. The GNTB promotes several destinations all over the world for people to visit.

MobileCoin Review: Should You Buy MOB as a Crypto Investment?