The most popular cryptocurrency price tracker CoinMarketCap removed several South Korean exchanges from its listings. The world’s second-largest exchange in terms of trading volume Bithumb was removed along with Coinone and Korbit. CoinMarketCap tweeted on Monday about their decision to remove the exchanges.

This morning we excluded some Korean exchanges in price calculations due to the extreme divergence in prices from the rest of the world and limited arbitrage opportunity. We are working on better tools to provide users with the averages that are most relevant to them.

Ripple dropped over 16% in 6 minutes 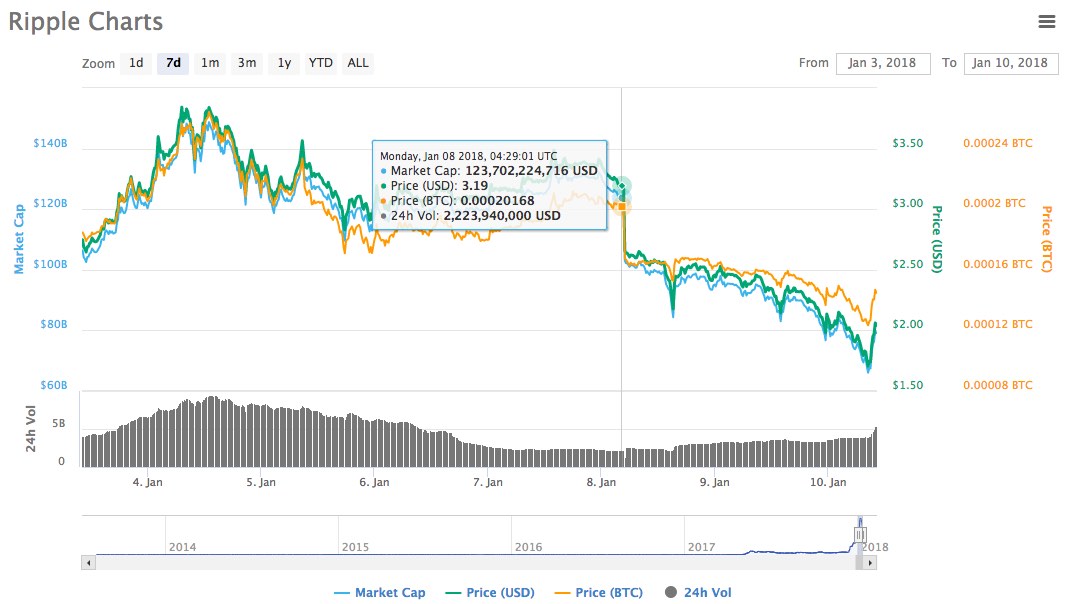 Ripple lost over one billion in market capitalization and suffered a 30% price drop on the day that CoinMarketCap removed South Korean exchanges from its price calculations. This new announcement by CoinMarketCap caused rapid selling, and in 6 minutes the price dropped over 16%. Ethereum (ETH) reclaimed its position as the second largest cryptocurrency by market capitalization.

Cryptocurrency Ripple (XRP) is traded in South Korea at very high volumes. Ripple prices are also over a dollar higher on South Korean exchanges than on most other exchanges worldwide.

The uptrend in Ripple prices seems to be over. Rumors that Coinbase would add the altcoin weren’t real. Coinbase has since confirmed (4 January 2018) that it would not add Ripple yet. Since the price of Bitcoin is under 000, we might enter a bear market and the price of Ripple will probably experience a slow decline.